An agent group, also known as automatic call distribution (ACD), is a system that routes incoming calls to a specific group of agents. Before connecting to an agent, callers are placed inside a queue, allowing agents to deal with incoming calls without losing other callers to busy signals or unanswered phones. While waiting, callers hear music and pre-recorded announcements . Agent groups can be monitored using a number of monitoring methods .

Agent groups are often found in offices that handle high-volume customer calls from callers who do not need to speak with a specific person but who require assistance from any of multiple persons, like sales representatives and airline reservations attendants. Agent groups have a wide range of features . 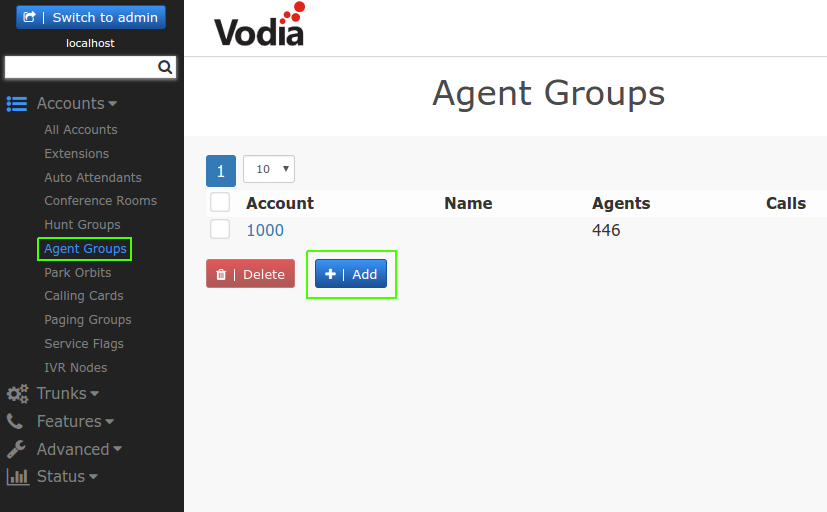 Once you've created an agent group account, use the following information to configure it.

Explanation and Use of Some of the Settings Under Some Tabs

The settings are under different tabs. 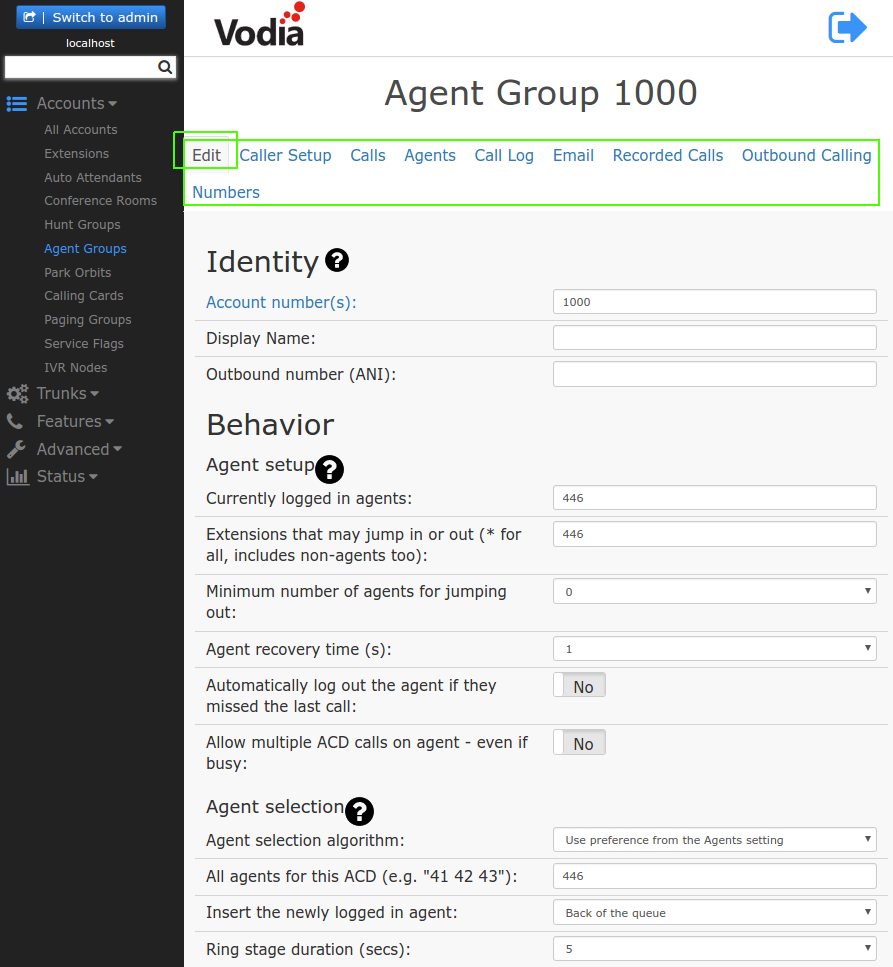 This section allows you to establish timeout settings that will determine the length of time a call is kept in queue or ringback state in a given situation. In this section, you can instruct the system to add additional agents or to redirect a call after the call has been in ringback for a given length of time. You can also instruct the system to redirect a call once a caller's wait time has passed a certain threshold.

Night service is used to redirect calls to other extensions or phone numbers during certain times of the day/night or other events that are outside normal business hours. Before night service can be used, a service flag account must be created for each night service number.

The first three settings in Night Service allow you to make provision for when no agents are available:

The following two settings are used to configure the service flag(s) to night service numbers:

Note : You can also use a special character pattern (#L) to activate the service flag when all agents are logged out, even if the logout period is within normal working hours. All calls will automatically be redirected to the specified night service number(s). 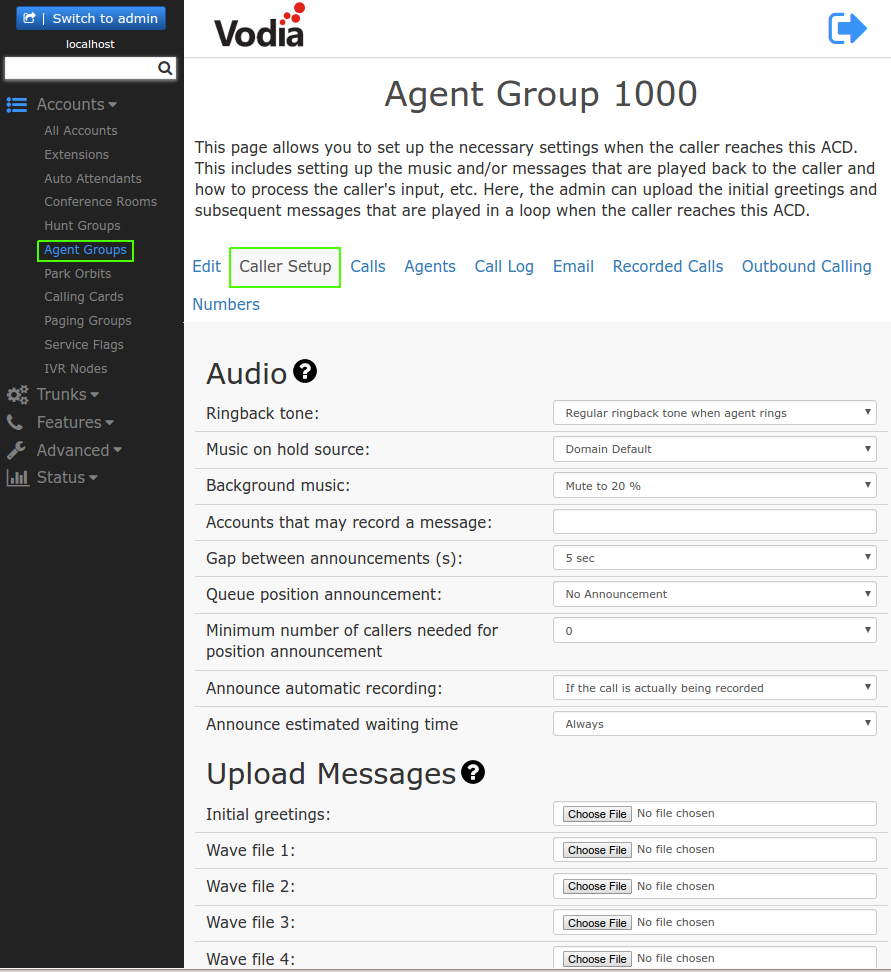 The number of available greetings within any agent group is nine. Record only those greetings that should be used. If no greetings are needed, even an initial greeting, don't record any. When recording greetings, you need to assign a number to each greeting; for example, *0is the entry greeting, *1is the first greeting, *2is the second greeting, etc. The number is entered as the last number in the string.

Instead of having callers wait in the ACD, the system can instead call waiting callers back when it is their turn.

In order to enable this, the ACD needs to offer a call back key which will be annouced to the caller. The ACD will annouce the callback possibility when entering the queue either always, never or depending on the expected waiting duration of the caller. Typically only callers that are facing a significant waiting time will use the callback feature.

On order to avoid fraud a dial plan is needed for the callback. The number needs to match with a trunk in the dial plan. This makes it possible to use an existing dial plan or set up a dedicated dial plan for the ACD.

When the system calls the number, the system will play back an annoucement to the user about the callback and then puts the caller into the ACD at the position where the caller would be when juts holding the call. The number of attempts and the waiting duration between the attempts is set with the general outbound calling parameters below.

After the call is over, the system can collect a feedback from the caller. In that case, the agent needs to disconnect the call and the caller needs to stay in the call. There are two ways to receive a feedback. The first one is to redirect the call to an external survey number, for example survey services outside of the system.
The second possibiity is to use the built-in feedback mechanism that asks for a 1 to 5-star rating of the call. The rating will be logged along with the CDR for the call and is available throughout the various reporting mechanisms for the ACD.
If the caller leaves a low rating this may trigger a follow-up with the caller. For this the system offers a redirection number, which is typically a manager that will check what went wrong.

Caller options allow the caller to exit the agent group queue and connect to another destination. To give the caller this option, use the Caller Options fields to map telephone keypad numbers to other extensions or phone numbers.

Once extensions or phone numbers have been entered into the "Key" fields, the caller must be made aware that these options are available. The system will not do this automatically. The place to do this is through the greetings that are delivered by the system (using the *98star code feature). One greeting or several greetings can be used to inform the caller that this additional option is available. In the following table, greeting 2 informs that caller that key 1 can be pressed to leave a message.

While the caller is waiting, the system delivers a combination of pre-recorded messages and music. The messages can be used to provide additional information about your company, or they can be used to provide the caller with additional options and/or a way to exit the queue. Each agent group can be configured to play up to nine recorded messages. Between the messages are "gaps" of music which can be configured to span 5 to 180 seconds. This messagemusic cycle continues for as long as the caller is in the queue. Message 0 is considered the entry point message (which will never be replayed), and message 1 is the first message. an agent group using six different messages for its message-music cycle. Once message 6 has been played, the system returns to message 1 and repeats the cycle.

This sequencing of messages and music will continue until an agent becomes available. Once an agent is available, the system automatically takes the next call out of the queue, rings the agents, and puts the call into ringback state. Within any one agent group, only one call at a time can be in ringback state, regardless of the number of agents that are available. All other calls remain queued until the ringing call is connected and at least one agent becomes available.

While it might seem logical to conclude that a caller's time in the queue has ended once the call has been placed in ringback state, this is not always the case. If an agent leaves the desk without logging out of the queue, the ringback state will continue until the system finds another agent to answer the call. To prevent nonstop ringing, you can take two precautions: (1) you can configure the agent group to include additional agents at specified intervals in the ringback cycle and (2) you can configure the agent group to play music during the ringback state. This will prevent the caller from hearing long periods of ringing in the event there are episodes of extended ringback. 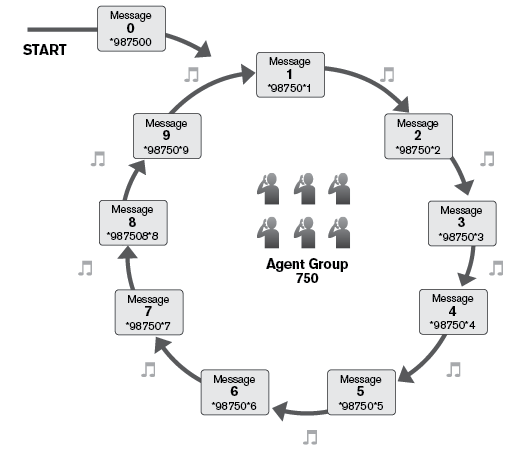 Listening to Greetings from the Phone
To listen to greetings quickly from the phone, change the gap between announcements to 1 and call the agent group directly from your phone. The recorded messages will be played quickly.

Settings
The following settings control how the outbound calling works. Some settings also affect the automatic callback feature (see above). 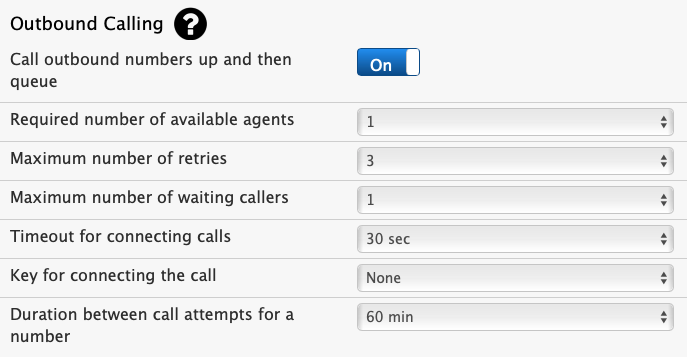 You can also import numbers through the CSV import dialog.

To initiate dialing, agent group members can dial *55xx(where xxis the number of the agent group).

The Vodia PBX plays a few prompts to help the agent navigate during the calling process.

After a successful call, the Status changes to Ok for the dialed number. This means that the number will not be attempted again. If you want the Vodia PBX to attempt that number again, you have to reset the Status for that number. This can be done by selecting the check box and clicking theReset button. If you do not want to keep the number in the outbound call list, you can select the number and click Delete . This removes the number from the list.

Agent group members can use one of two methods (buttons or star codes) when logging in and out of agent groups.

Important: Before agents can use either method, agents must be included in the Extensions that may jump in or out setting. Another setting that must be considered is theMinimum number of agents for jumping out setting (shown below). The latter setting is used to prevent the agent group from becoming too small; however, if this setting is too high, agents will be unable to log out of the agent group. 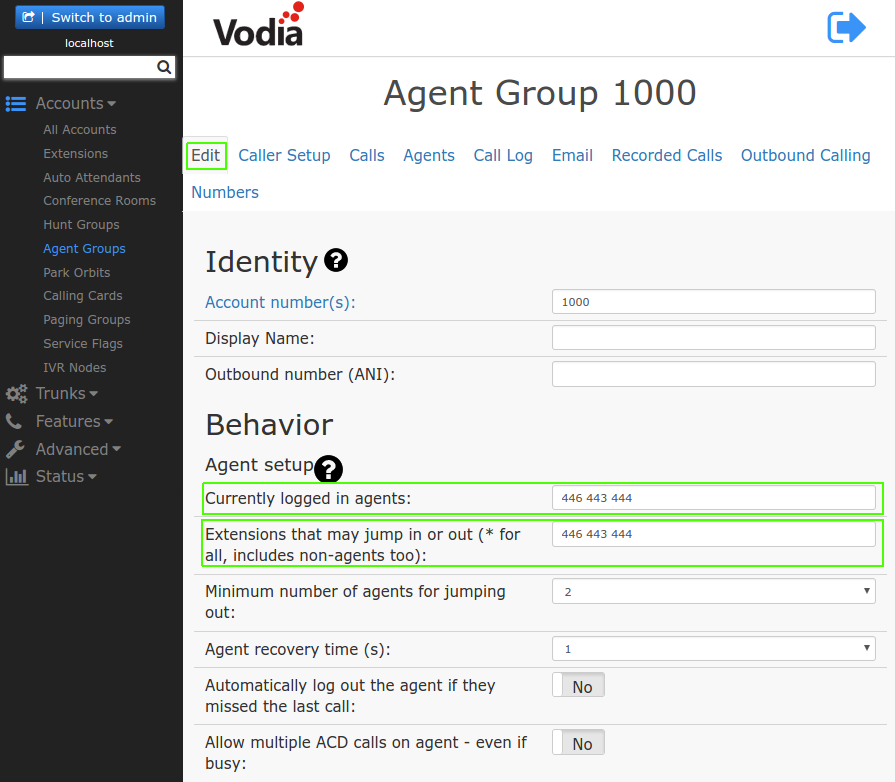 This method allows users to use a button on their phone to log in and out of agent groups. When configured properly, the button will have a toggle effect. When the button is pressed, users will be logged in to all agent groups, and the associated LED(s) on their phone will light. When the button is pressed again, users will be logged out of all agent groups and the associated LED(s) will no longer be lit. If users need to log out of one agent group before logging into another, multiple Agent login/logout buttons can be configured.

Important: Before you can use this button, the star codes for Agent logged in/Agent logged out must match (e.g., *65/ *65). 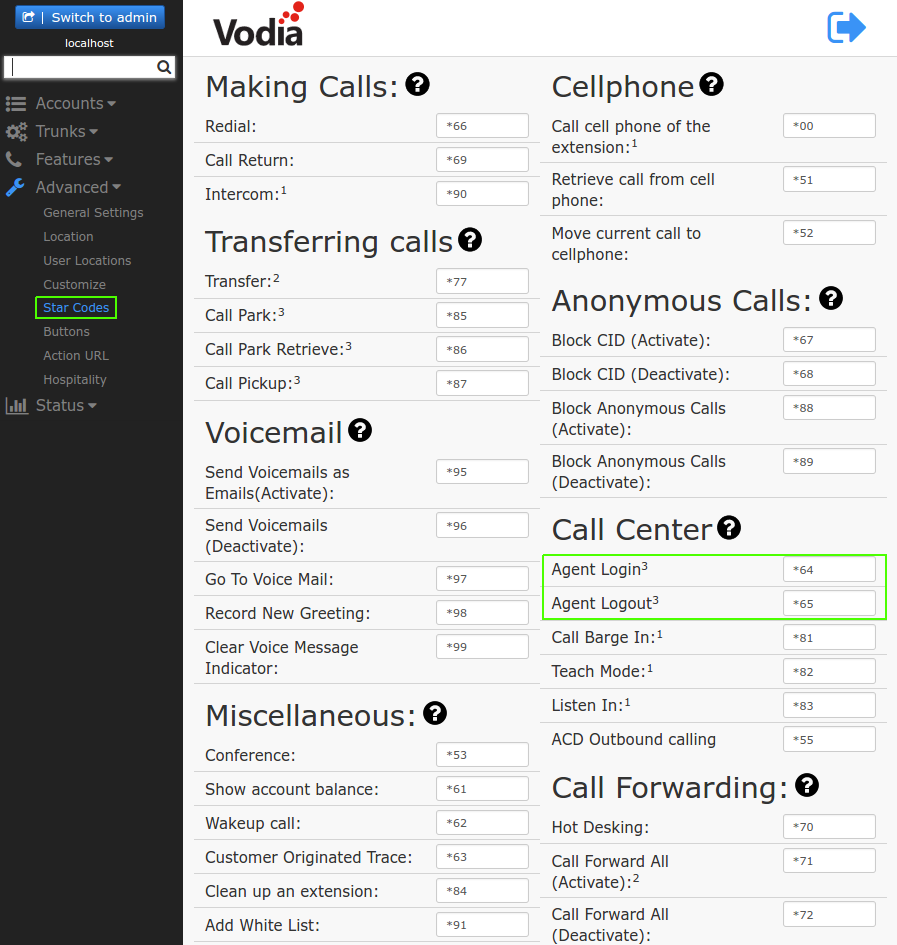 Agents who are members of numerous agent groups and who need to log out of one agent group before logging into another can do so by entering the agent group number after the star code. Using the sample shown below, the agent will be logged out of agent group 666 and will retain logged-in status for all other agent groups.

Was this article helpful?