A hunt group is a set of extension numbers that are embedded inside a single virtual extension. Incoming calls are rotated through the pool of extensions until someone answers and the caller is connected. (Cell phones can also be configured to be included in calls made to a hunt group.) 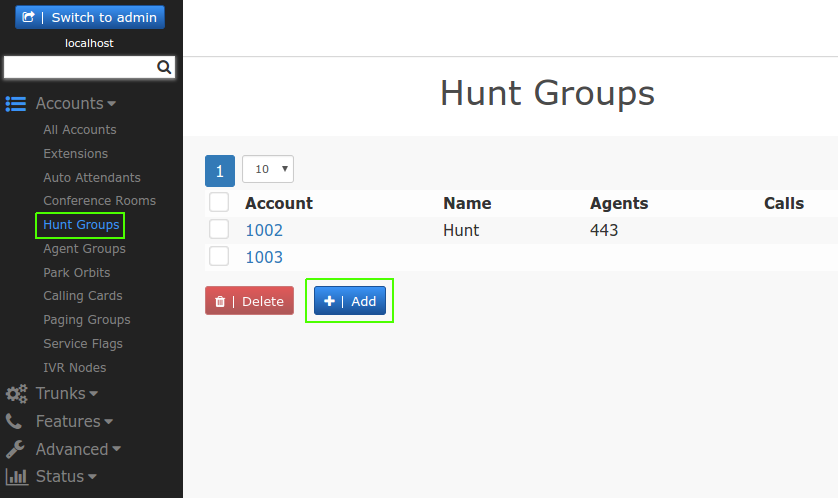 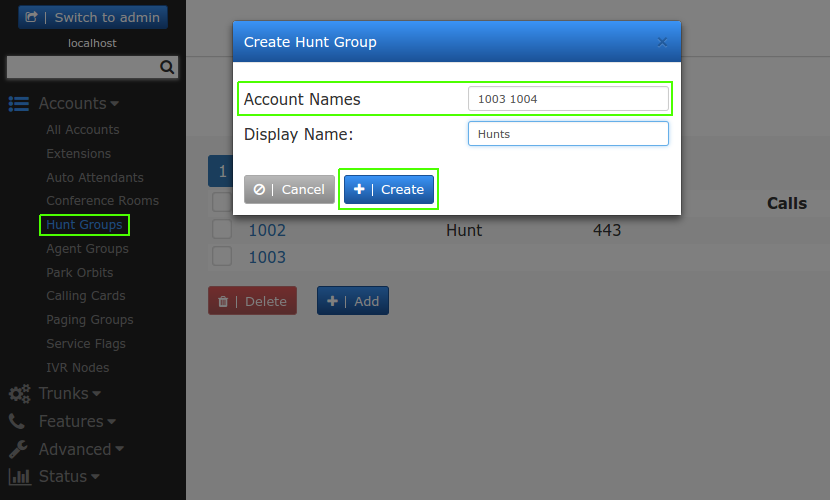 Once you've created a hunt group account, use the following information to configure it.

Explanation and Use of Some of the Settings 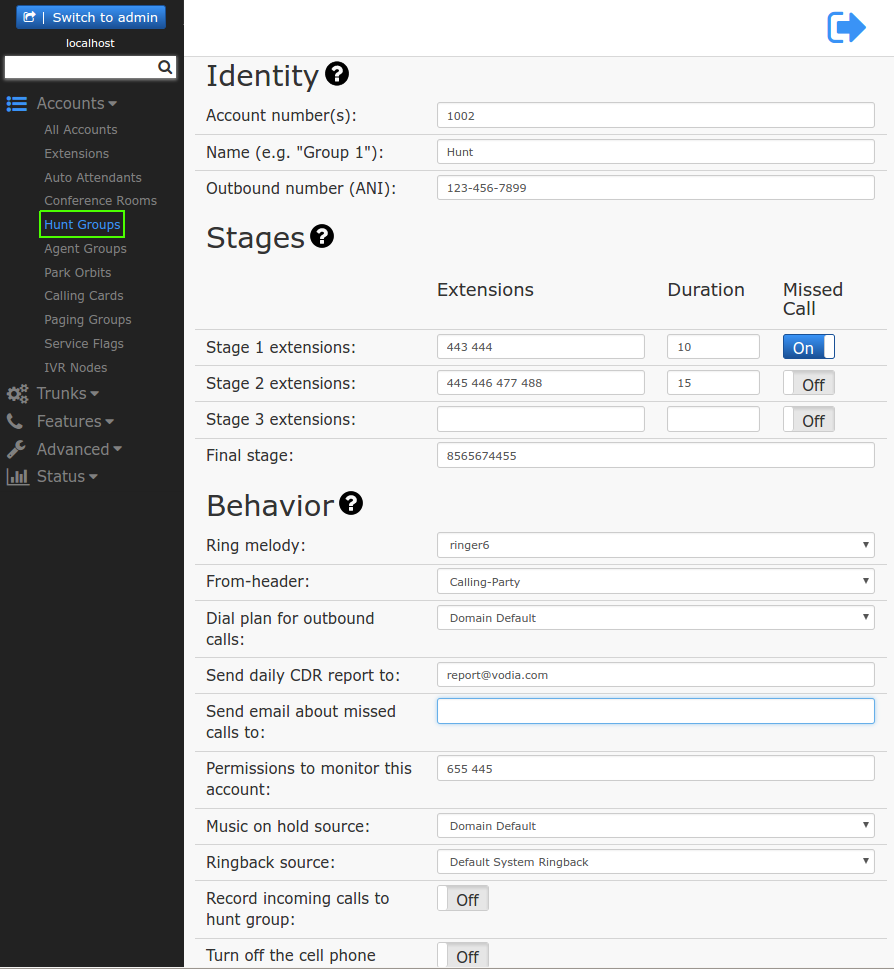 Account Number(s): This field takes extension number(s) and/or DID number(s). The number of DIDs that can be entered into this field is unlimited.

Name: This field allows you to create an alias so that you can quickly identify the Account among other Accounts.

The extension numbers that are part of a hunt group can be arranged into groups known as stages. Each stage is configured to ring for a specified period before the system begins ringing the next stage. To continue ringing the same extension throughout all stages, include that extension in each ring stage. A last-resort or final stage number (often an auto attendant or a cell phone) can also be used when none of the extensions pick up the call. A common use case for the hunt group is to use the hunt group as the main number for incoming calls, then put the receptionist, secretaries, and assistants on the different stages.

The hunt group supports three stages and a final stage. Each stage can be configured to ring for a different number of seconds, and the final stage can be either an internal or external phone number.

If all extensions of a stage are unavailable, the system will immediately move to the next stage.

If you check the missed flag for the stage, the PBX will send a missed call indication to the phone when it moves to the next stage and the phone is not part of the next stage.

Note : The number of extensions permitted for the first three stages is limited by hardware only. The system must send INVITEs to all extensions in each stage, which requires more CPU.

Custom ringing Each hunt group can be configured with different ring tones.Employees can determine which hunt group is calling.

BLF indicator The system can be configured so that the busy lamp field indicator lights up when the hunt group is in use.Hunt group activity is visible through the BLF indicator.

Group name caller-ID Hunt groups can have a unique name and can be configured to display the name of the group, the caller’s caller-ID, or both when a caller enters a hunt group.Helps management decide who belongs in each named group. Employees know the nature of the call before answering it.

Final stage to cell phone After calling the extensions listed in stages 1 through 3, the system calls the “final stage” number, which can be an auto attendant, an extension, or an external number.Callers are sent to a manager as a final means of assistance. This feature can also be used to gauge whether the group of extensions is too small or whether the employees are working properly.

Ring stage duration Hunt group stages can be configured to ring for different durations before the system rings the next group of extensions.Call flow control can be established. Intervals that keep customers waiting a minimum amount of time can be used.

Recordable calls Calls made to hunt groups can be recorded and saved on the system.Recorded calls can be reviewed by management to fine-tune employee performance. Disputes can be easily resolved by emailing the recorded conversation.

Behavior settings allow you to control numerous account behaviors. You can choose a ring melody, a display header, and music on hold source. You can also enter a safety net phone number that will be used if no one picks up a call. Other settings are here as well.

Night service allows you to redirect calls to other extensions during off-hours, meetings, etc. Before you can use night service, you need to create a Service Flag account.

From Header in Groups

In Hunt Groups and Agent Groups, the PBX is able to display more information about where the call comes from.

Generally speaking, the remote party information consists of two components, the "display name" and the URI. For example, if the display name is "Group 1" and the URI is sip:123@domain.com, the remote party information would be "Group 1" . What is being displayed, depends on the settings of the phone that you are using. Many phones are only displaying the display name; others only display the user part URI between the "sip:" and the "@" symbol.

In addition to that, you may also add other information manually into the setting. You can that by editing the template for the hunt group or agent group web page (add a option to the select for from_header). Here, you may use the following pre-set variables when generating the display name:

For example, if the calling party username is "123" and the called party "456" and you select the Customized, then the SIP URI would look like "123 to 456" in the above examples.

You can initiate hunt group calls from the REST API. This has the effect that the PBX will first try to connect to one of the listed destinations before calling the other side of the hunt group. This can be useful for example when including multiple parties in click to dial functions or when a message has to be played to one person in a group of people, for example for an alarm system.

The REST call has the following components:

/accountID of the hunt group, including the domain name (e.g. 77@localhost)

/destinationDestination to call after one of the hunt group destination picks up.