There is no German content available for this article, You are viewing the fallback version (English).

An IVR node can be configured for complex tasks so that callers can for example enter account numbers and pay bills through an external application server .

In IVR node can operate autonomously or interact with an external application server. It collects input from the user or from within the system, and calculates what to do next based on extended regular expressions (ERE).

When a caller reaches an IVR node, the system plays back the prompt that has been set for that IVR node. Once the caller answers the system by pressing the required digit(s), the system will continue processing the call. This first IVR node is typically used as an entry door into the system, and the nodes that follow are used to decide how to proceed next with the caller. For example, the IVR node can ask the customer for account information then ask an external application server where the customer should go from there. Based on the answer from the external application server, the customer is routed to the appropriate waiting queue.

An IVR node can also be used to define dialog that will be used to process calls. In this case, each node plays one prompt and asks a specific question to the caller. The first prompt may ask the caller what language is preferred and then dispatch the caller into two different node systems for two different languages. This IVR node mechanism is very flexible and allows you to either process the input internally in the system or use an external application server to decide where to go next. The IVR node collects the user input according to the list of ERE expressions that was entered in the node’s match list. In the simplest case, a static routing is sufficient without consulting the external server, but it depends on the user input.

IVR node have a wide range of features and can be linked to an external application server . 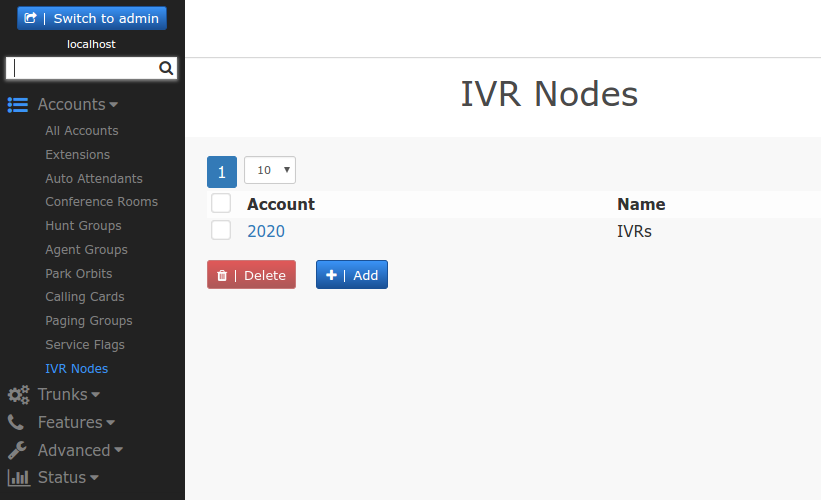 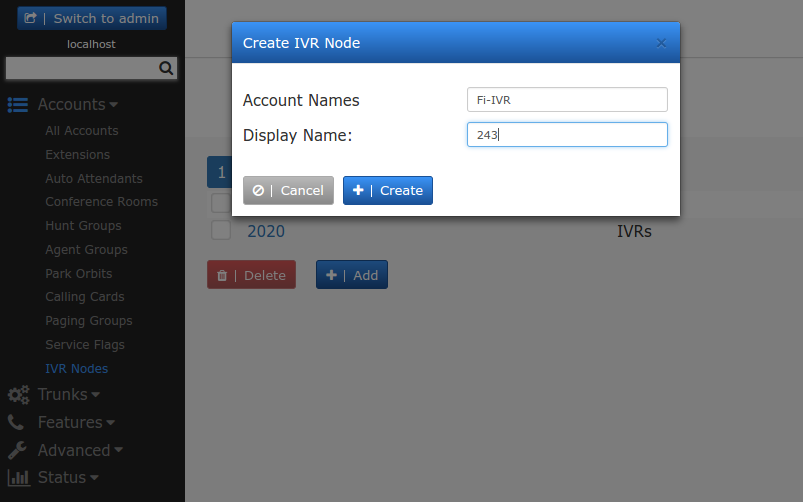 Setting up an IVR Node

Once you've created an IVR account, use the following information to configure your settings. 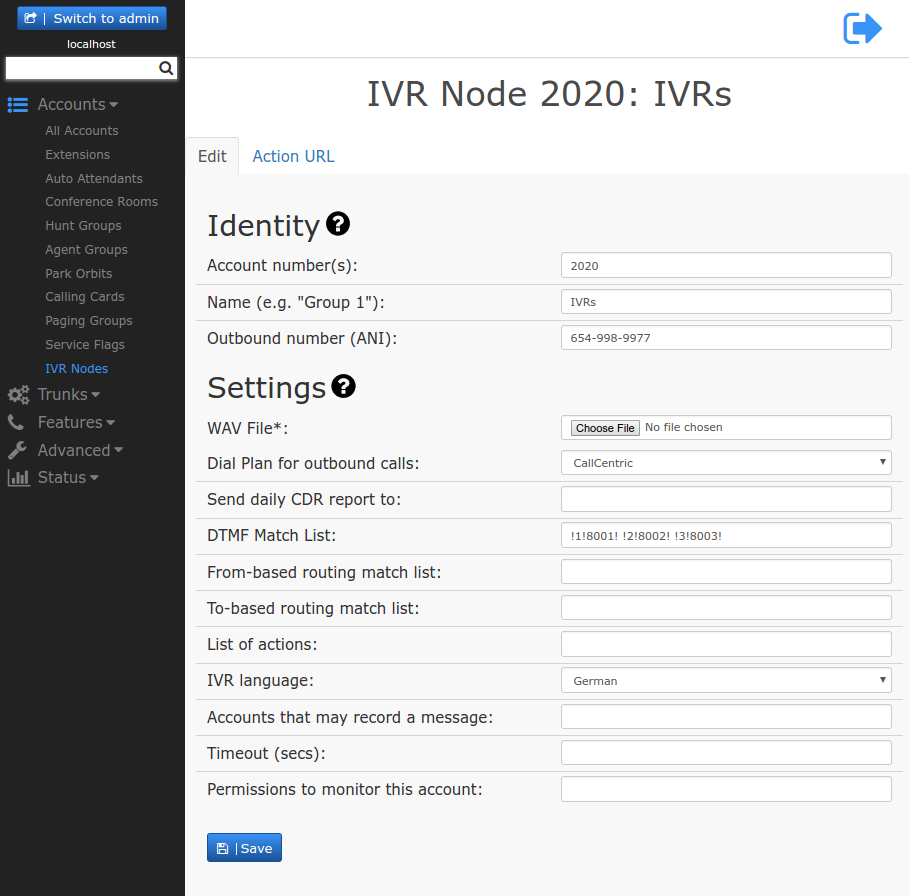 When choosing a name for a hunt group, use a short name if you plan to use the Group name (calling party) option in the From header to ensure that it will fit into the display of the phone.

Messages can be recorded using the Record Message (*98) star code, or they can be uploaded through the web interface. Both methods are detailed in the following sections. Users must have permission to record greetings before they can record greetings for an IVR node using *98. The permission is given in the IVR account itself.

To record the message:

WAV files allow you to record and edit your message before loading it into the system. They also allow you to use professional IVR dialogs. From the IVR Node settings:

The following input is available:

The "DTMF Match List" contains a list of match patterns that are checked. The list elements are separated by space. Each pattern contains of two fields. The fields are separated by any character that does not occur anywhere else in the string, for example !. The first field contains the extended regular expression and the second field the replacement. The field has the same meaning as the fields in the dial plan. The second field contains the destination.

The destination may be any dial able number. If the number requires a dial plan, the default dial plan of the domain will be used. If the destination field contains a single dash (-) and the pattern matches, the PBX will disconnect the call.

The other two fields, "From-based routing match list" and "To-based routing match list" are used when the PBX opens the IVR node. The format is the same like in the "DTMF Match List". If there is a match with the "From" or the "To"-header of the call, then the IVR node immediately switches the destination without playing the WAV file. This way, you can implement flexible routing schemes.

The timeout specified in the "Timeout" field starts either when the PBX sends the call to the IVR node or then the user enters a digit.

If no "List of actions" is specified in the account, the PBX will take the output of the pattern matching as the name of the account to switch to. If the "List of actions" is available, it will pass the destination to the application for further decision what to do with it. See Linking External Application Server to an IVR Node for more information about the SOAP processing.

One of the nice features about the IVR nodes is that you can use it to change extension parameters. The name of the setting is in the "name" parameter, the value in the "value" parameter. You can use parameter substitution (for example, "{input}") to set a value that was entered by the user. The account that will be changed can be in the parameter "account" (starting with version 64.1); if it is not present it will set the account that was returned by the regular expression matching.

Let's consider an example on how to reset the message waiting indicator of an extension using an IVR node.
Following has to be setup on the PBX before we can use this feature

Once this is setup, if the operator wants to reset the voice mail for extension 200, she

At this point, the voicemail indicator for extension 200 is reset. Now you have to reboot the phone and the vm indicator on the phone will go away.

You can use similar setup to modify other extension parameters.

The PBX can also generate a REFER request on the leg that has called (since version 56.6). For that use the action referwith the parameter dest. For example, action:refer?dest={input}will send a REFER to the calling leg and asks it to dial the number that was the result of the extended regular expression matching, typically the user input.

You can initiate a IVR node call from the REST API (starting at version 5.5). This will call the number that you provide instead of having that number call the PBX. The dial plan of the IVR node will be used to make that call.

This feature makes it possible to call numbers up, for example to notify them about upcoming events and collect the feedback via the Action URL feature of the IVR node.

The REST call uses the GETmethod and has the following components:

You may include a parameter timeoutthat shows how long the PBX should wait before disconnecting the call before the call connects. For example https://pbx/rest/ivrnode/77@pbx.com/dial/2121234567?timeout=30.

You may upload a WAV file for an IVR node. This feature can be useful to make the annoucement dynamic, for example include a time and a date in a upcoming appointment reminder. Because there is only one WAV file upload per IVR node, you must ensure that there are no overlapping uploads when you perform batch annoucements.

The REST call uses the POSTmethod and has the following components:

The attachment of the POSTis the WAV file. The file must be 8 kHz, mono, 128 kbit/s linear audio. If there is no attachment, the WAV file will be deleted.