There is no German content available for this article, You are viewing the fallback version (English).

Cell phones are widely available for most users and can be integrated with the Vodia PBX in two ways. As a first possibility, users can install the Vodia apps on their devices and use the data network to connect with the PBX, which is described in a seperate document.

As an alternative way, cell phones can be used through their PSTN calling features. This has the advantage that the user does not have to install an app and that it tends to work better when data connectivity is not as good as telephony cell phone service. Similar to SIP VoIP phones, they can be used to receive and make phone calls. However the call is not routed natively routes through a SIP network, the cell phone typically uses a mobile phone standard like GSM or CDMA.

The settings for the cell phone allow you to configure one or more cell phones to your extension. Cell phone integration is different from having two phones registered to the same extension. Registering two phones to the same extension allows you to merely receive calls at one of two locations, while cell phone integration allows you to receive calls at any location, as well as be reached at numerous phone numbers. Cell phone configuration allows you to be accessible at all times, even in the event of a power failure. If the office extension (or remote extension) is disconnected from the system, calls will automatically be sent to your cell phone. Once the phone is reconnected, incoming calls will automatically be rerouted to the extension. 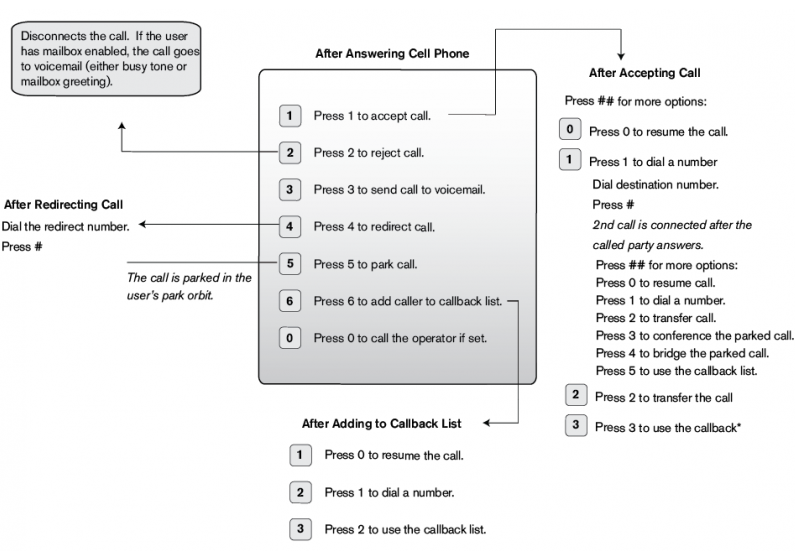 When this cell phone calls the PBX: This setting defines what the system should do on incoming calls. It can either offer the personal virtual assistant or just apply the general rule for routing inbound calls. In case the private virtual assistant is enabled, the PBX offers the following options: